skip to main | skip to sidebar

Are You Afraid of the Dark?: The Tale of the Midnight Ride

The Midnight Society has had to say good-bye to both David and Kristen, what with their families moving and Kristen needing to go method act by studying Alicia Silverstone's every move to prepare for her role as the smaller screen version of Cher Horowitz. So we have room for two more. Gary brings his little brother Tucker to be the newest member because his parents are making him. The rule is that each prospective member has to tell a story, and if it doesn't suck (or features a cool teen celebrity like Melissa Joan Hart or the Mowry twins), they're in. Of course, since nepotism is the rule of the day, Tucker's audition makes about as much sense as that one lone producer asking Ashlee Simpson if she knew what the key of C was (to be fair, it was his first day).

Frank, Kiki, and Betty Ann are skeptical that Tucker will do a good job but apparently they have no choice. So Tucker calls his story the Tale of the Midnight Ride. (Apologies to Mr. Longfellow.) 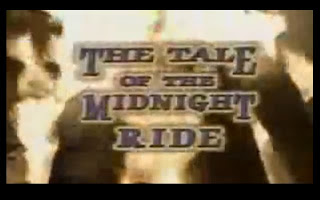 It takes place in Sleepy Hollow. Oh, so the twist is you're not ripping off Longfellow, but Washington Irving? Tucker tells us the story of how a Hessian soldier got his head blown off by a cannon ball and so became the Headless Horsemen. Said horseman went on to haunt Ichabod Crane. Right off the bat you know that Tucker probably spent less time writing this and more time in the library with Cliff Notes. (Hey, who can blame Tucker? This was a golden age of TV for kids and he probably wanted to watch Power Rangers that night.)

Ian, our main character, is a dorky bookish type who's really into a pretty girl named Katie. Katie's being courted by the boorish Brad but she's really not that into him. Did you get that? Ian=Ichabod, Katie=Katrina, and Brad=Brom Bones. Oh, subtlety, thy name is Tucker. (And before you can self-righteously pipe up with, "The word is homage," no, Tucker. No, it's not. For anyone who's not a pretentious bohemian art student, it's "send-up," "spoof," or "allusion," but not, for the love of god, homage.)

There's a dance at school where Brad spends a lot of time hitting on Katie but she's more interested in dancing with Ian. 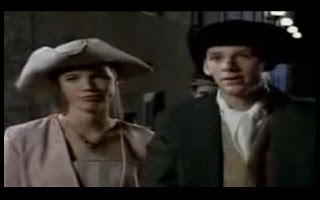 After all, they came in matching his and her three corner hats. When Ian tells Brad to get lost, the two take it outside. 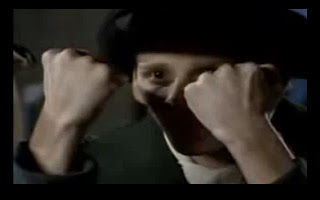 Oh, Ian, I didn't know it was possible, but somehow you make the Cowardly Lion look as butch as a Tom o'Finland drawing. Instad of fighting, Brad tells Ian about the Legend of Sleepy Hollow, how Ichabod Crane took the wrong path and went deeper into the woods instead of across the bridge where the horseman couldn't get him. I wonder if this will be at all relevant later. You know, since we've only been told about Ichabod Crane twice. I think the real twist would be if Rip Van Winkle turned up passed out in the bathroom and the gang had to figure out whether to call 911 and risk not going to good universities, or dump him in the river and brave what insane hooked killers may come.

Brad tells Ian that he should go try to find the headless horseman's pumpkin at the bridge to prove he's brave. (I'm pretty sure that even if this story were based on real events, said pumpkin would be a rotting mess by now.) It's either that or a fight. So Ian goes.

At the bridge, he turns around and sees a headless fellow. Don't get too excited. We're less than halfway in, and if R.L. Stine and Caroline B. Cooney have taught me anything, you always reserve the real scares for three quarters through. 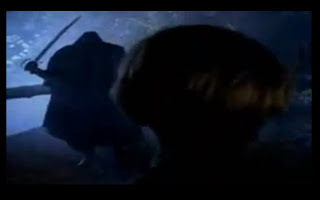 It's Brad in a headless get up. He's also surrounded by everyone who was at the dance who presumably came to laugh at him. Katie's there, too. If she knew what Brad was up to, why didn't she warn Ian?

Brad snaps his fingers and assumes Katie will come with him, but she stays with Ian and asks him to walk her home. He tells her it's the one thing that would make this night worthwhile and extends his elbow to her saying, "Take thee my muddy arm." (Please, please, please, don't ask her to grant you her dainty hoof in marriage, Ian, and we'll be cool.) As they head off, we pull back to see... 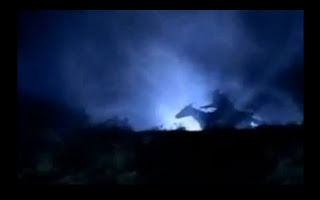 He's the real headless horseman. If the fact that he's on a horse didn't clue you in, the swirling fog and ominous music let you know for sure.

Then the two run into a guy in whiteface on a horse who tells them his name is Ichabod Crane and he's the new schoolmaster. Ichabod-ghost simpers, "I'm afraid I have lost my way in these wretched woods. Would you be so kind as to direct me to the bridge of souls?" 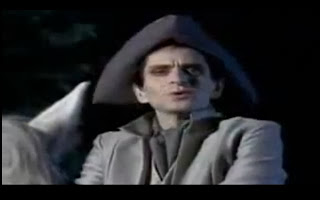 They tell him to take the left path in the fork in the road to get to the bridge. "Lucky thing," he responds, "I surely would have taken the right!"

(Note to whoever's playing Ichabod Crane. There's a difference between playing a role gay and playing it old-fashioned. And an even subtler distinction between gay and British but I guess the Joey Tribbiani School of Soap Opera Acting didn't cover that unit yet. I bet it was lessons like this that explain why he went on to such meaty roles as the voice of Mr. Ratburn on PBS's Arthur.)

Ian walks Katie home and then heads back to get his bike at the school. He realizes he forgot his key in his jacket and can't unlock the bike. Katie shows up with the jacket and key in hand. He says, "Come on, I'll ride you home." (Um, Ian? It's 1994--chivalry is dead and Ani DiFranco just did a tap dance on its grave. And also...ew.)

In the distance they see a shadow of the headless horseman. This time, he's actually on a horse and he's got a pumpkin for a head. 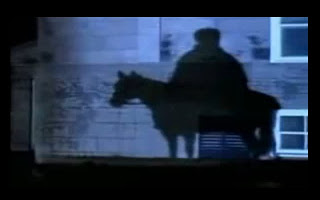 They eye roll, thinking it's Brad but they soon realize it's not...when the shadow comes out of the wall and materializes.

The kids run, realizing that their only hope is to get to the bridge because the horseman can't cross. They wonder what the horseman is doing. Shouldn't he be off terrorizing Ichabod Crane? But they realize that they messed up the story when they told Ichabod to take the left path, and now the horseman is after them.
Ian tells Katie the horseman can't get them both so they should split up. He proposes to distract the horseman while Katie runs for the bridge. But because this is the nineties and Katie has been reared on a steady diet of "Take Your Daughter to Work Day," American Girl dolls, Title IX, and RiotGrrl, she immediately says that she will distract the horseman. She runs off and Ian starts for the bridge. But Katie falls flat on her face and girls everywhere put down the Sleater Kinney CDs, burn the zines, and head to Victoria Secret for push-up bras.

Ian turns and runs for the bridge while Katie encourages him. The horseman chases Ian (passing up an incapacitated teenage girl? Well, I guess we know that's not the ghost of William Kennedy Smith running around) but disappears in flames as it tries to cross the bridge. 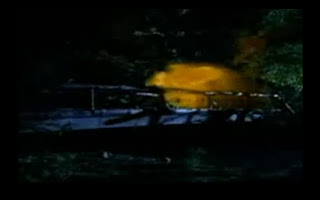 Why a fiery mass? Well, the FX crew really wanted to try out that insta-flame effect. Don't laugh. Back in Canada in '94, this was a big deal.

Katie makes sure Ian's okay. He's hanging from the edge of the bridge and he pops up saying, "And I thought this place was boring!" Zany understatements. Is there any kind of traumatic experience that they can't smooth over? 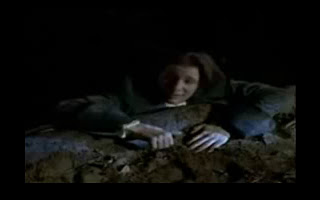 Ichabod Crane shows up again to scold the kids about staying out too late. (And not to yell at them for stealing his signature look?) They ask him what he's doing here, and he said he thinks he lost his way and should go back to the fork in the road and take the other way to set things straight. Gotta love literary characters who are resigned to their fates. Though I have to ask--how can you see the ghost of a fictional character?
I also have to smack Tucker with a copy of The Legend of Sleepy Hollow because if we're to believe this is a send-up of the original story, it makes zero sense. In the original, there was no actual ghost. Brom Bones (dressed as the headless horseman) was the one who got Ichabod. And no, Tucker, you don't have the excuse of, "But the movie said--" because that particular love note of Tim Burton to Johnny Depp doesn't come out for another four years.

Tucker finishes and looks around to see if he's in. Kiki's reaction: "That'll do, pig, that'll do." Betty Ann smiles warmly and tells him how awesome it was, and Frank, playing the Simon to Betty Ann's Paula, just warns Gary to keep Tucker out of his face. I'm with you, Frank, I haven't seen such desperate courting of the 7-10 demographic since the Planeteers took on that damned "Heart!" kid and his simian pal. Gary high fives Tucker and then as he puts out the fire, says to himself that he hopes he doesn't regret this, in the same tone of voice as Aaron Spelling when he finally decided to let Donna Martin pop her cherry.
Posted by Sadako at 12:00 PM

Are You Afraid of the Dark?

What's Up With Alex?

Cartoon All-Stars to the Rescue

Sadako
Snarking my way through every facet of today's pop culture. Got a tip, comment, or just want to say hi? E-Mail me at dibblyfresh1[at]gmail.com